<< Back to News and Events Home Page 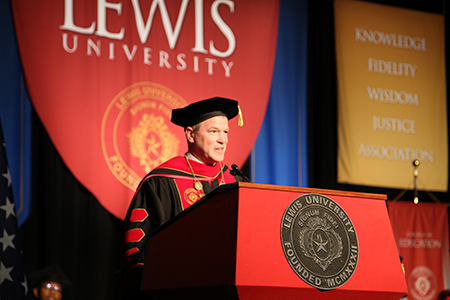 The days festivities began with a Mass of Thanksgiving celebrated by Bishop R. Daniel Conlon of the Diocese of Joliet. His homily message focused on how tradition needs to be translated. He said, Our task is to be child-like in listening to the spirit. Listen to how we can take our wonderful Catholic tradition, Lasallian tradition and translate it into something with power, meaning and life for the students of this university and for our world.

The Inauguration ceremony followed the Mass. The opening procession began with To Welcome a New Day by Michael Stewart. The musical piece was specially commissioned for Dr. Livingstons Installation Ceremony. Steward served as conductor of the Signum Fidei Brass Choir for the occasion.

During the ceremony, Brother Gustavo Ramirez Barba, FSC, General Councilor for Association and Mission for the Brothers of the Christian Schools headquartered in Rome, Italy, presented Livingston with the De La Salle Medallion which was blessed by Pope Francis.

Russ Smyth, Chair of the Lewis University Board of Trustees, presented Livingston the Chain of Office. It symbolized the authority conferred as a sacred trust by the Board of Trustees to the President as the chief executive officer of Lewis University. By virtue of his office, the president is personally entrusted with the responsibility of promoting the Mission and values that serve as the foundation of Lewis Universitys service to its students and its distinctive identity as a Catholic University in the Lasallian tradition.

I believe that Lewis University is well positioned to deliver a meaningful and pragmatic education for our time, said Livingston during his inaugural address. It is not enough that we educate students to learn a profession; we must prepare them for the professions we cannot imagine today.

My wish for each of our students is that they leave feeling mastery in their subject area and confidence in their ability to make a living, while also knowing that they will enjoy the waves of change that lie ahead because Lewis prepared them with an unquenchable desire to learn. I am so fortunate, for I have the privilege every day of listening in on this fascinating conversation.

Livingston brought more than 15 years of academic and leadership experience to Lewis University when he assumed the role of president on July 1, 2016. Livingston previously led Lourdes University as president. Prior to that experience, he served Mercyhurst University for 16 years in various diverse capacities, including president of the Faculty Senate and vice president for Advancement. Prior to joining the Mercyhurst community, he taught religious studies at Loyola Academy High School in Wilmette, Vanderbilt University in Nashville, University of St. Francis in Joliet, Joliet Catholic Academy and Loyola University of Chicago.